The Salvation Army responded on Monday to reports that Chick-fil-A was cutting ties with the Christian organization over its support for traditional marriage by noting that it is the largest social services provider in the world and that it serves millions of members of the LGBT community.

“We’re saddened to learn that a corporate partner has felt it necessary to divert funding to other hunger, education and homelessness organizations — areas in which The Salvation Army, as the largest social services provider in the world, is already fully committed,” The Salvation Army said in a statement. “We serve more than 23 million individuals a year, including those in the LGBTQ+ community. In fact, we believe we are the largest provider of poverty relief to the LGBTQ+ population.”

“When misinformation is perpetuated without fact, our ability to serve those in need, regardless of sexual orientation, gender identity, religion or any other factor, is at risk,” The Salvation Army continued. “We urge the public to seek the truth before rushing to ill-informed judgment and greatly appreciate those partners and donors who ensure that anyone who needs our help feels safe and comfortable to come through our doors.”

We love all. We serve all.
Read The #SalvationArmy‘s full statement in the image and here: http://salar.my/Statement 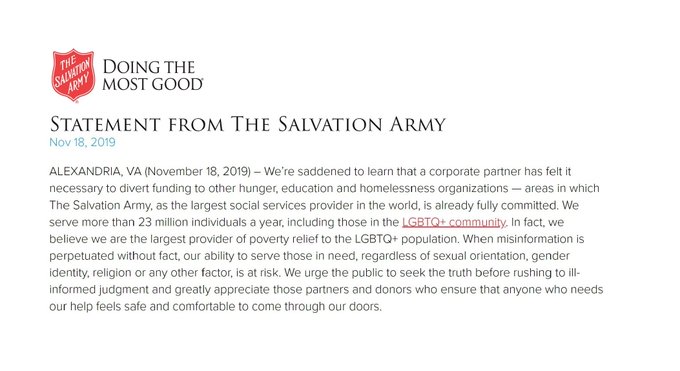 The Salvation Army’s statement came in response to an interview that Chick-fil-A President and Chief Operating Officer Tim Tassopoulos gave to Bisnow.

“As Chick-fil-A expands globally and into more liberal parts of the U.S., the chicken chain plans to change which charities it donates to after years of bad press and protests from the LGBT community,” Bisnow reported. “Beginning next year, Chick-fil-A will move away from its current philanthropic structure, Bisnow has learned. After donating to more than 300 charitable organizations this year, the Atlanta-based fast-food chain will instead focus on three initiatives with one accompanying charity each: education, homelessness and hunger. ”

Bisnow noted that Chick-fil-A would “no longer include donating to organizations like the Salvation Army, the Fellowship of Christian Athletes and the Paul Anderson Youth Home.”

After facing intense backlash online ever since announcing its decision, Chick-fil-A gave a new statement to The Christian Post:

Beginning in 2020 the Chick-fil-A Foundation will introduce a more focused giving approach, donating to a smaller number of organizations working exclusively in the areas of hunger, homelessness and education. We have also proactively disclosed our 2018 tax filing and a preview of 2019 gifts to date on chick-fil-afoundation.org. The intent of charitable giving from the Chick-fil-A Foundation is to nourish the potential in every child.

Our goal is to donate to the most effective organizations in the areas of education, homelessness and hunger. No organization will be excluded from future consideration – faith-based or non-faith based. I also wanted to add that Chick-fil-A will not be opening on Sundays.

To see this article and others from Daily Wire, click read more.

Penna Dexter The chaos that characterized much of our electoral process this year is no shock and here’s why: When Democrats retook the House of Representatives two years ago, they surprised many of their constituents with the …

Kerby Anderson With Thanksgiving behind us and Christmas in front of us, this is the time of year when many are thinking about charitable giving. Mark Cuban tweeted that instead of donating to candidates in the …