It’s beyond obvious that they’ve been lying, and it looks like the facade is starting to crumble internally, too.  Let’s start with a reminder of how preposterous the ‘official’ stats have been.  This chart depicts how Hong Kong — an island of openness that moved aggressively against Coronavirus in its early stages, with a fair amount of success — supposedly accounts for a wildly disproportionate number of China’s total active cases.  The only logical conclusion here is that the mainland numbers are scandalously underreported, as underscored by the heavy sarcasm in this tweet:

✔@AlanMCole
As we all know, there are two regions in China:
– The well-organized mainland, which has about 0.05 cases per million, and
– The dopey goofball region of Hong Kong, known for its deep incompetence, which despite being <1% of the population has 20% of the reported active cases. 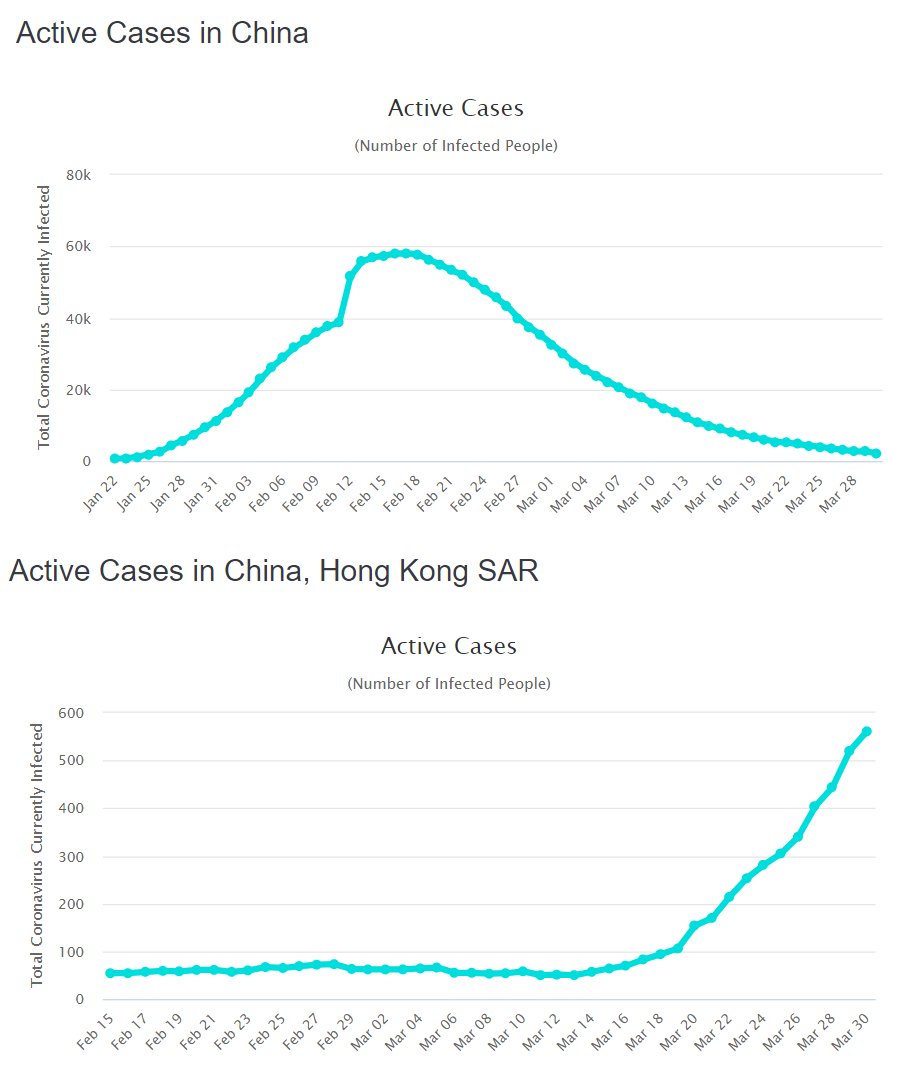 The Wuhan Coronavirus is rising precipitously in Hong Kong, but in mainland China — where the disease originated (this is interesting and I’d like to learn more about it) — it’s just a smooth flattened curve down to almost no cases.  Who in their right mind believes this charade?  Certainly not the American intelligence community, which has reportedly determined what almost everyone strongly suspected to be the case:

China has concealed the extent of the coronavirus outbreak in its country, under-reporting both total cases and deaths it’s suffered from the disease, the U.S. intelligence community concluded in a classified report to the White House, according to three U.S. officials. The officials asked not to be identified because the report is secret and declined to detail its contents. But the thrust, they said, is that China’s public reporting on cases and deaths is intentionally incomplete. Two of the officials said the report concludes that China’s numbers are fake…Stacks of thousands of urns outside funeral homes in Hubei province have driven public doubt in Beijing’s reporting.

Apparently, not even some Chinese government officials are able to maintain the deadly farce at this stage:

China revs its engine to move past coronavirus, but it’s stuck in second gear
Businesses that recently reopened have been told to close again as the country weighs an economic reboot against the risk of new infections.
washingtonpost.com
96
8:23 AM – Mar 31, 2020
Twitter Ads info and privacy

Brian Windhorst
✔@WindhorstESPN
The Chinese Government issued a new order today restricting resumption of team sports, a heavy blow for pro basketball to return there soon as was planned. China’s attempt to restart sports are being watched closely by leagues across the world. Huge issue is asymptomatic carriers
3,065
8:31 AM – Mar 31, 2020
Twitter Ads info and privacy

They’re clawing back alleged “progress,” even as their formal stats depict a near-perfect, near-universal recovery.  The mismatch is glaring and speaks for itself.  And Beijing is starting to make minor confessions about the nature of their under-count:
Underscoring the difficulties of capturing the extent of the pandemic, China said more than 1,500 people who were infected with the virus but haven’t shown symptoms weren’t included in its national tally of confirmed cases…Chang Jile, a top Chinese health official, said the country would report the number of infected people who aren’t showing symptoms beginning Wednesday.

Anyone who is credulously sharing charts “proving” that America’s response to COVID-19 is ‘the worst’ in the world without adjusting for population size, and while accepting China’s internal data, should not be taken seriously.  It’s embarrassing:

JERRY DUNLEAVY@JerryDunleavy
Imagine posting a coronavirus chart dated yesterday when today it was widely reported that China admitted that it was indeed underreporting its numbers. https://twitter.com/maddow/status/1245099638874660865 …
Rachel Maddow MSNBC
✔@maddow
US trajectory is worst in the world.
From the FT – @jburnmurdoch 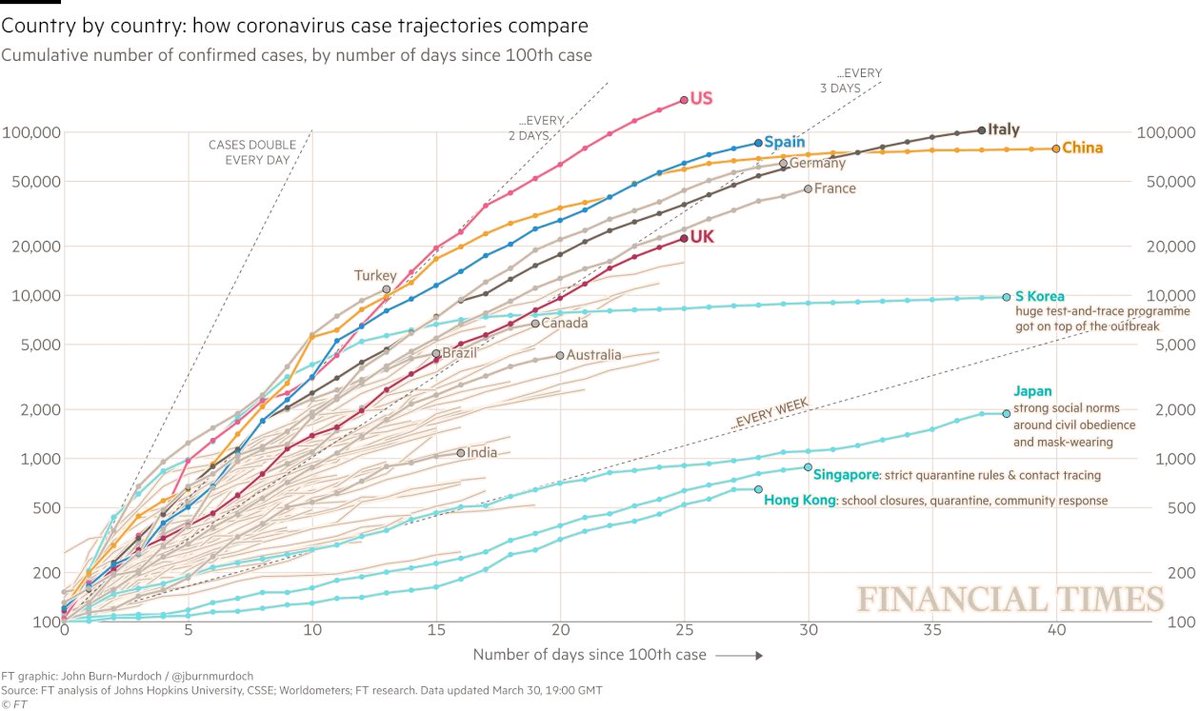 Twitter has been suspending and chiding American political commentators and figures (generally of one ideological persuasion) for spreading Coronavirus misinformation, while others get a pass.  What I’m really curious about is how CCP mouthpieces continue to be permitted to spread straight-up propaganda while certain American users are policed more aggressively.  And it’s not just Chinese government apparatchiks, either; it’s “journalists” within their state-run media operations:

Guy Benson
✔@guypbenson
So straight-up CCP propaganda is allowed on @Twitter, but American media personalities (generally of one political stripe) get suspended over content deemed to be misinformation? https://twitter.com/huxijin_gt/status/1245049217665519616 …
Hu Xijin 胡锡进
✔@HuXijin_GT
COVID-19 deaths in the US have exceeded the number of China. It is solely caused by US govt’s mishandling. Wuhan imposed a lockdown on Jan. 23, sending a clear warning. The US only had 1 confirmed case then and there was time. Trump administration has failed the American people.
4,210
5:41 PM – Mar 31, 2020
Twitter Ads info and privacy

Let’s be clear about China’s indisputable culpability in all of this.  They covered-up the existence and nature of the virus, lied about it, punished dissenters and whistleblowers, and blamed the US military.  The lies have continued.  And their early denials, deflections and misinformation had lasting effects on the global response (aided, outrageously, by the World Health Organization):

Chuck Ross
✔@ChuckRossDC
WHO accepted China’s numbers and came to the conclusion that coronavirus was not being spread by asymptomatic carriers. Surely that shaped the response to the pandemic by giving a false sense that the virus could be contained. https://dailycaller.com/2020/03/31/chinese-government-underreporting-coronavirus/ …

A tweet from January has many questioning why the World Health Organization blindly shared what may have been Chinese propaganda about the coronavirus. The COVID-19 virus outbreak is believed to have started in Wuhan, China, in December. In mid-January, the WHO tweeted a study that was made public by the Chinese Communist Party, claiming that humans could not spread the coronavirus to one another. “Preliminary investigations conducted by the Chinese authorities have found no clear evidence of human-to-human transmission of the novel coronavirus (2019-nCoV) identified in Wuhan, China,” the organization tweeted on Jan. 14.

Dr. Deborah Birx politely but clearly pointed a finger at China’s opacity during Tuesday’s grim press briefing, as she and Dr. Anthony Fauci each pushed back against questions blaming the US for tardy responsiveness to the pandemic:

TheWu-HanClan.357@ASimplePatriot
Dr. Deborah Birx says U.S. officials initially responded to coronavirus outbreak way that they did because they thought it was going to be “more like SARS” and not a “global pandemic” *BECAUSE* “we were missing a significant amount of the data” from China 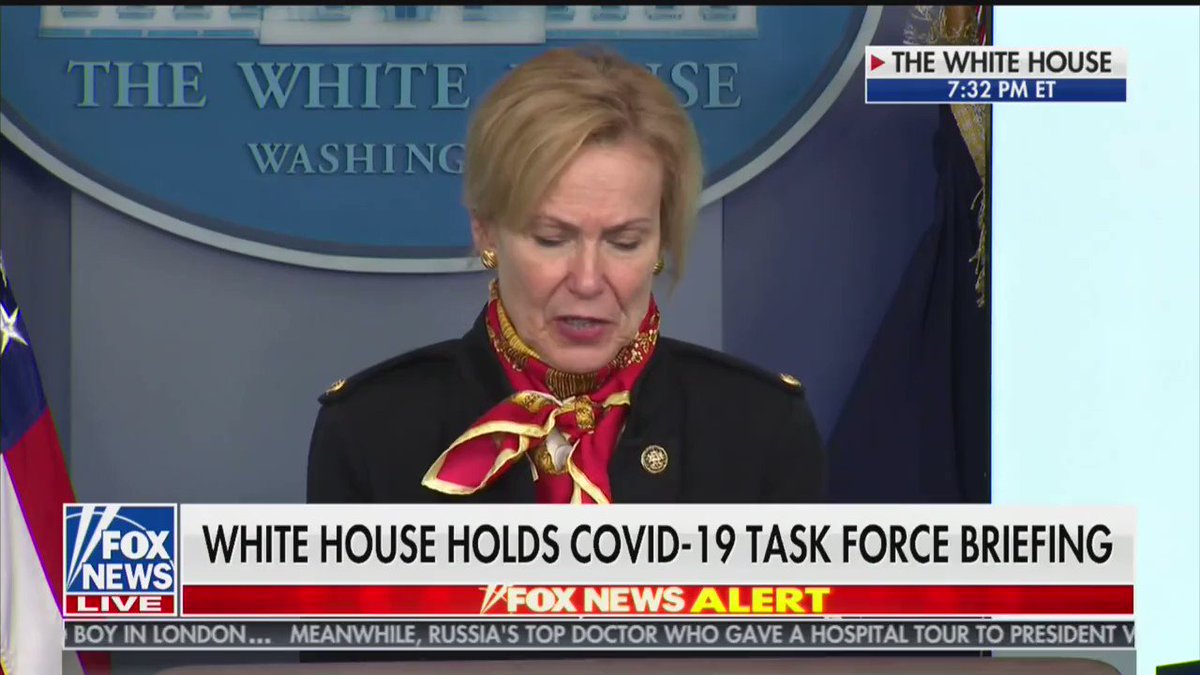 Joe Concha
✔@JoeConchaTV
Dr. Fauci pushes back at Acosta questions around the U.S. not acting early. “In a perfect world, it would have been nice to have known what was happening there (in China). We didn’t. But I believe, Jim, that we acted very early.”
22.4K
6:02 PM – Mar 31, 2020
Twitter Ads info and privacy

This does not absolve American officials for failing to act early enough, or downplaying the threat for too long — as people like President Trump and Mayor DeBlasio (and many in the now-indignant news media) unquestionably did.  Accountability at home matters a great deal.  But the greatest human single, by far, force behind the rapid spread of this pandemic is the Communist government of China.  Period.

To see this article, others by Mr. Benson, and from Town Hall, click read more.