Nothing like proving your critics correct as you complain about their charges.

When it comes to obliviousness and lack of self-awareness it is tough to find a group afflicted worse than our contemporary press corps. Maybe it is that they are charged with ferreting out and then delivering the facts that their collective lack of introspection is made all the more stark. But the fact is the blind spots displayed by our journalists are both sharp and amusing.

This weekend a pair wholly unconnected news events came together to display this reality. One of those was the fabrication of the press itself. On Thursday morning, as most are well aware, Arizona Senator Martha McSally referred to a CNN reporter — Manu Raju — as a liberal hack. She never even slowed her stride as she spent possibly three seconds to deliver the rebuke that sent a shockwave through the press that has lasted for days.

While our nation’s navel-gazers are busy consoling themselves over this unprecedented attack in the state of Virginia a pro-Second Amendment rally was being held today. This was in direct response to that state’s legislature undertaking new gun laws that will impede directly on the personal liberties of firearm ownership. Our news leaders promptly turned into a full-on liberal talking points generator in order to detail the events on today.

To grasp the bias on full display understand that for the days leading up to the rally that there was all manner of predictions that this event would descend into violence. First, you had aggression-prone agitators showing up en masse to screech at the governmental leaders — a disturbing sight, according to many in the media. This was a very curious position for them, considering they have been in full support of The Resistance making anti-Presidential statements for years.

The other component was that many attendees would be bringing weapons, many of those ‘’assault weapons’’, according to the firearms experts in the press. The promise of violence and even death was inevitable. Too bad those protesting broke that promise, as no violence took place. CNN in one report was visibly disappointed in this reality, based on the graphics it posted during its reports.

The disappointment shown by CNN is palpable. Understand, these are the same minds who see actual violence taking place at Antifa rallies and they have no such condemnation nor worrry. Here is a quick primer to help you follow their logic:

NBC reporter Gabe Gutierrez found a bothersome aspect of the rally. He recorded crowds chanting ‘’We Will Not Comply’’. Except, he really did not. This crowd is audibly reciting the Pledge of Allegiance.

Gabe Gutierrez
✔@gabegutierrez
Chants of “we will not comply” from gun rights protesters in Richmond. 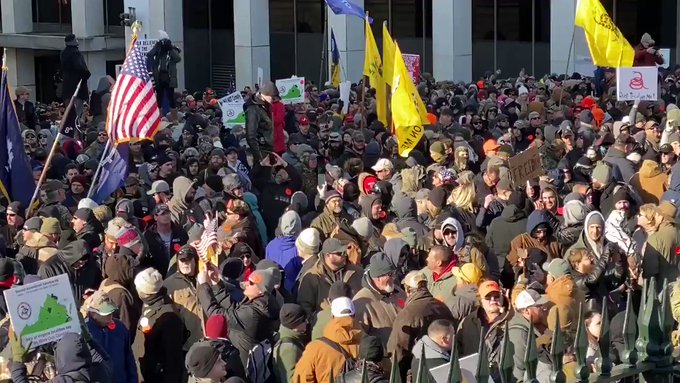 Later he posted another video that did have the chant heard — not spoken by crowds, but by a handful of those standing near his position. Again, voicing opposition to an unconstitutional law is shown to be problematic, but those who have been in full throat opposition to the President have been applauded and granted airtime by these same folks.

Over at The Huffington Post, Andy Campbell tried mightily to explain away what did not properly transpire at the rally. He was so convinced he nailed the ‘’problem’’ he failed to see how he proved himself incorrect.

✔@AndyBCampbell
The far right will claim this rally was peaceful because counterprotesters didn’t show. Just remember that if everything stays peaceful – everyone hopes it does! – it’ll be because nobody shot anybody.
The issue with violence in this country is still the guns and extremism. 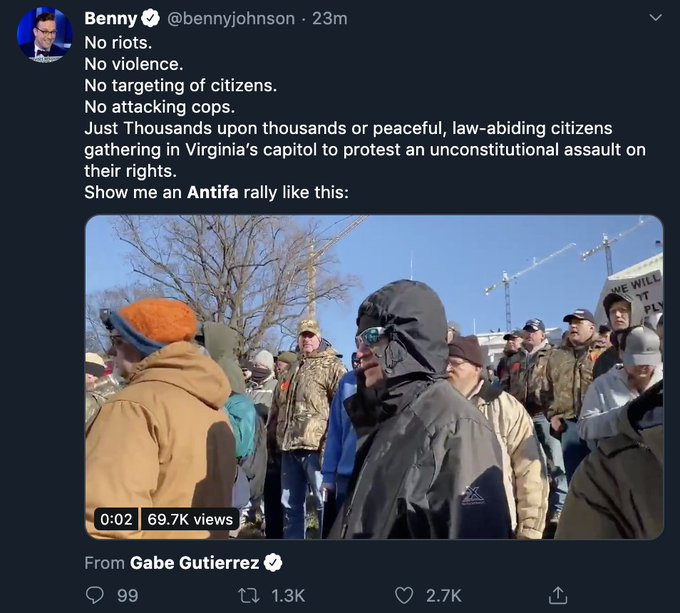 Try to figure this out; when no violence takes place, it is only the ‘’far-right’’ who can see this, and those people ‘’claim’’ it is peaceful. I’m sorry, …

Source: The Media Who Whined Over Being Called Liberal Hacks Displayed Hackery with Gun Protest