As the number of confirmed COVID-19 cases continues to rise and schools, workplaces and public gathering spaces across the United States remain closed, a new Pew Research Center survey finds that the coronavirus outbreak is having profound impacts on the personal lives of Americans in a variety of ways. Nearly nine-in-ten U.S. adults say their life has changed at least a little as a result of the COVID-19 outbreak, including 44% who say their life has changed in a major way. 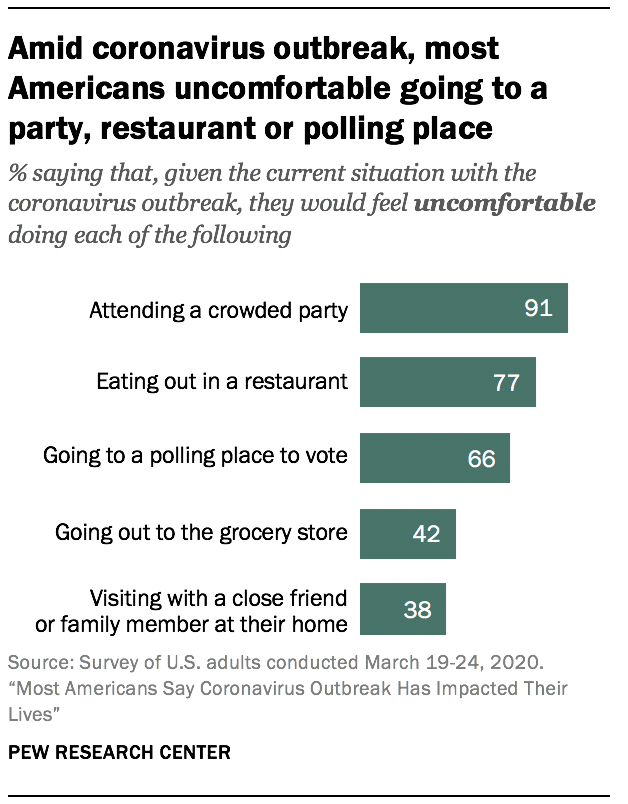 Amid widespread calls from experts for Americans to socially distance from one another to avoid spreading the virus, what recently seemed like mundane daily activities now elicit concerns from large swaths of the population. About nine-in-ten U.S. adults (91%) say that, given the current situation, they would feel uncomfortable attending a crowded party. Roughly three-quarters (77%) would not want to eat out at a restaurant. In the midst of a presidential election year, about two-thirds (66%) say they wouldn’t feel comfortable going to a polling place to vote. And smaller but still substantial shares express discomfort even with going to the grocery store (42%) or visiting with a close friend or family member in their home (38%).

How are people adapting their behavior in light of the outbreak? Four-in-ten working-age adults ages 18 to 64 report having worked from home because of coronavirus concerns – a figure that rises to a majority among working-age adults with college degrees and upper-income earners. Still, despite current circumstances, about two-thirds of adults with children under 12 at home say it’s been at least somewhat easy for them to handle child care responsibilities. 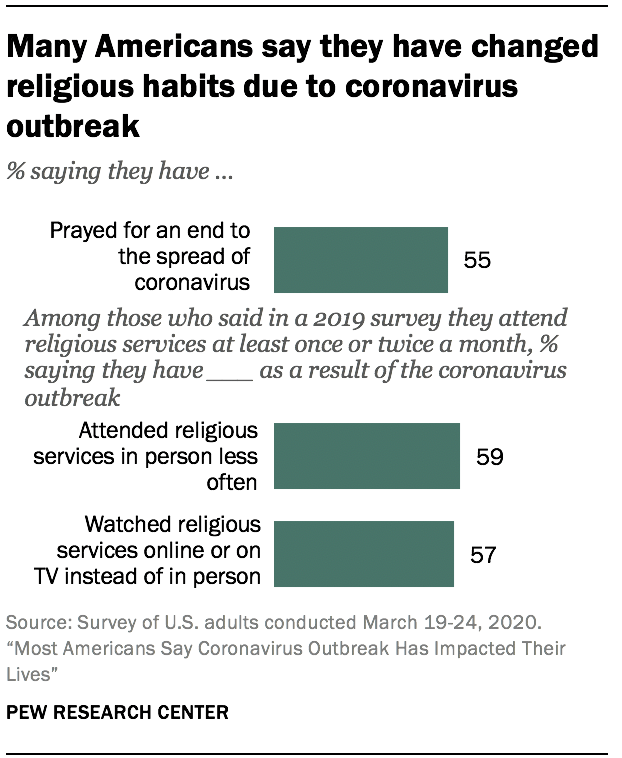 The virus also has impacted Americans’ religious behaviors. More than half of all U.S. adults (55%) say they have prayed for an end to the spread of coronavirus. Large majorities of Americans who pray daily (86%) and of U.S. Christians (73%) have taken to prayer during the outbreak – but so have some who say they seldom or never pray and people who say they do not belong to any religion (15% and 24%, respectively).

Among U.S. adults who said in an earlier survey they attend religious services at least once or twice a month, most (59%) now say they have scaled back their attendance because of the coronavirus – in many cases, presumably because churches and other houses of worship have canceled services. But this does not mean they have disengaged from collective worship entirely: A similar share (57%) reports having watched religious services online or on TV instead of attending in person. Together, four-in-ten regular worshippers appear to have replaced in-person attendance with virtual worship (saying that they have been attending less often but watching online instead).

These are among the findings of a Pew Research Center survey of 11,537 U.S. adults conducted March 19-24, 2020, using the Center’s American Trends Panel.1 Other key findings from the survey include:

Women (47%) are more likely than men (41%) to say their personal life has changed in a major way as a result of the coronavirus outbreak. And while more than four-in-ten white (45%) and Hispanic (47%) adults say this has changed their lives significantly, about a third of black adults (34%) say the same.

Income and education are also linked to assessments of the personal impact of the coronavirus outbreak. More than half of those with higher incomes (54%) say this has changed their life in a major way, compared with 44% of those with middle incomes and 39% of those with lower incomes.2

Across age groups, similar shares say the coronavirus outbreak has had a major impact on their personal life. For example, 43% of adults younger than 30 say the outbreak has changed their life in a major way, as do 45% of those ages 65 and older.

Among the 33% of Americans who say they or someone in their household has either lost a job or took a pay cut because of the coronavirus outbreak, 54% say their personal life has changed in a major way as a result of the outbreak. This compares with 39% of those who say they have not experienced either of these situations. 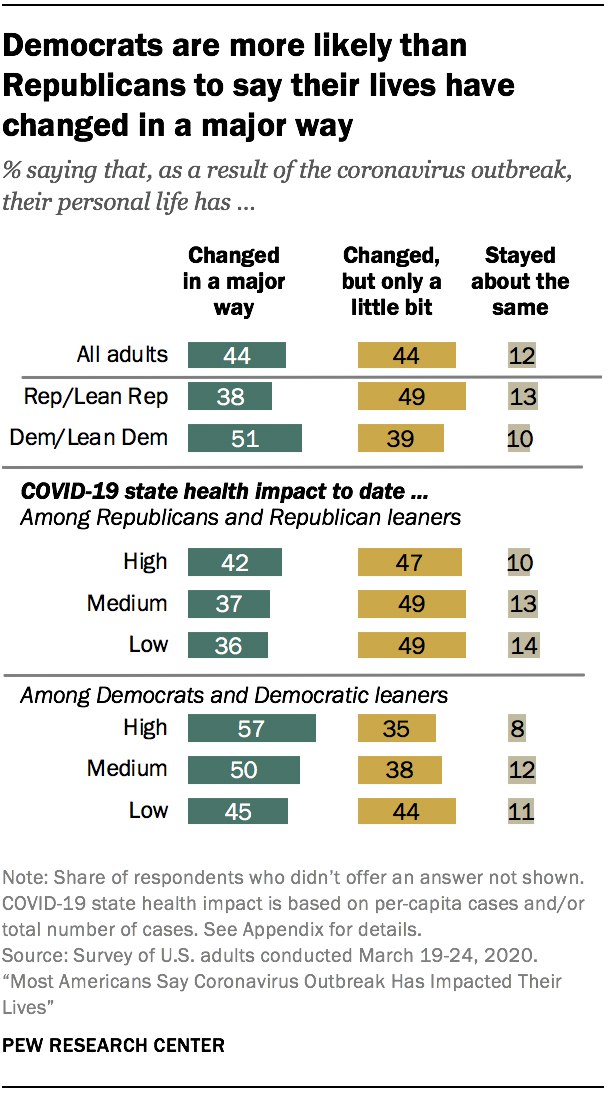 Democrats are more likely than Republicans to say their personal life has changed in a major way as a result of the coronavirus outbreak: About half of Democrats and Democratic leaners (51%) say this, compared with 38% of Republicans and those who lean to the GOP.

These partisan differences remain even after …

To see the remainder of this article and all the informative graphs, click read more.