Both Lee and Republican Kentucky Sen. Rand Paul addressed the media in the U.S. Capitol after leaving the briefing and criticized the way the briefing went. Lee at one point called it “the worst briefing I’ve seen, at least on a military issue.” Paul also said he would vote to support Virginia Democratic Sen. Tim Kaine’s War Powers Resolution.

This is a stunning statement from GOP Senator Mike Lee (Utah) who just left a classified intelligence briefing on the situation in Iran. 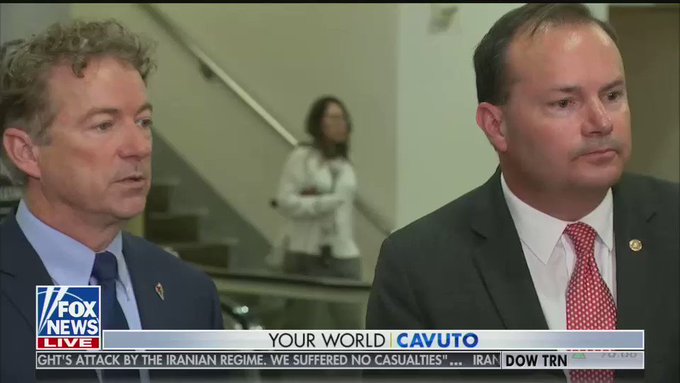 “What I found so distressing about that briefing was that one of the messages we received from the briefers was, ‘Do not debate. Do not discuss the issue of the appropriateness of further military intervention against Iran. And then if you do, you’ll be emboldening Iran,’” Lee said, The Salt Lake Tribune reported.

“The implication being that we would somehow be making America less safe by having a debate or a discussion about the appropriateness of further military involvement against the government of Iran,” Lee went on. “Now, I find this insulting and demeaning, not personally, but to the office that each of the 100 senators in this building happens to hold.”

“It is not acceptable for officials within the executive branch of government, I don’t care whether they’re with the CIA, with the Department of Defense or otherwise, to come in and tell us that we can’t debate and discuss the appropriateness of military intervention against Iran,” Lee continued. “It’s un-American. It’s unconstitutional and it’s wrong.”

Iran’s Islamic Revolutionary Guard Corps said the missiles were fired as an act of retaliation for the killing of Iranian Gen. Qasem Soleimani in a U.S. drone strike on Jan. 2, according to The Wall Street Journal.

President Trump addressed the nation just hours before members of Congress were briefed.

To see this article and others from the Daily Caller, click read more.

Source: Sen. Mike Lee Walks Out Of Classified White House Briefing Riled Up, And He Didn’t Hesitate To Say Why | The Daily Caller

Penna Dexter A fifteen-dollar per hour minimum wage has been a dream of the Left for a while now. Such an arbitrary number. Why not $50? Why not $100? If the goal is to “lift people …

Kerby Anderson One of the framed pictures in my office is a photograph I took at Glacier National Park when I was a teenager. I have always wanted to go back and photograph this beautiful place …

For the People Act

A new bill claims it will protect democracy and reform our elections. But H.R. 1, or the “For the People Act,” contains multiple provisions that would actually weaken our elections and open the door to …