Remember a week and a half ago when CNBC’s Rick Santelli said that “maybe we’d just be better off” if we just infected everybody with the coronavirus now? His reasoning:

Then in a month it would be over because the mortality rate of this probably isn’t going to be any different if we did it that way than the long-term picture, but the difference is we’re wreaking havoc on global and domestic economies.

Unlike his most famous rant, a February 2009 tirade against mortgage bailouts and in favor of a “Tea Party,” this one probably won’t help launch a political movement, given that Santelli apologized soon after and political sentiment here in the U.S. seemed to shift firmly in favor of a tougher virus-fighting effort in the days that followed.

But Santelli did raise a question that isn’t going away: how do we know we aren’t doing ourselves more harm with the measures we take to slow or halt Covid-19 than the disease would do to us on its own? As Stanford medicine and statistics professor John Ioannidis, a rather more serious commentator, put it in an essay for the science news site Stat this week, after acknowledging that the coronavirus could kill tens of millions worldwide if simply allowed to run its course:

With lockdowns of months, if not years, life largely stops, short-term and long-term consequences are entirely unknown, and billions, not just millions, of lives may be eventually at stake. 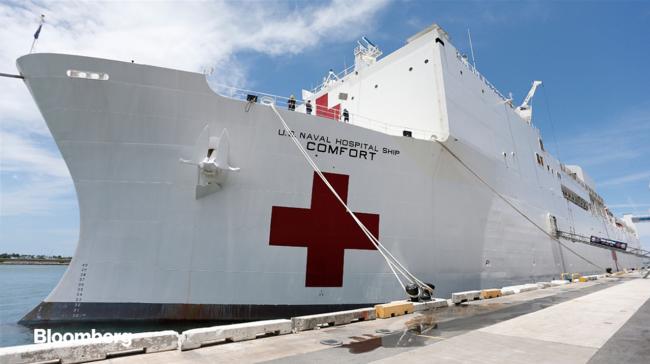 Mar.19 — As New York braces for a surge in coronavirus cases requiring hospitalization, a Navy ship, the USNS Comfort, is being reassigned to add 1,000 beds to the city’s capacity. Pentagon Spokesman Jonathan Hoffman, speaking at a briefing Wednesday in Arlington, Virginia, said the vessel is currently undergoing maintenance in Virginia, and would be ready to move up the coast in weeks, not days.

There are big problems with some of the claims made by Santelli and Ioannidis. Santelli is almost certainly wrong that “the mortality rate of this probably isn’t going to be any different” if a large share of the population contracts Covid-19 at the same time. It would likely be much higher because so many people with serious cases wouldn’t be able to get treatment, and the resulting death toll would probably drive a similar or even greater amount of economy-damaging self-quarantining and social distancing to what we’re seeing now, albeit it with a clearer and nearer end date.

Ioannidis, meanwhile, undercuts his argument that we need better data on the impact of the virus before making such monumental decisions by ignoring most of what is currently known about the impact of the virus. Ioannidis is best known for arguing that observational studies that purport to show negative health repercussions from eating meat or eggs are for the most part misdesigned and misleading, so his apparent suspicion of existing studies on Covid-19 death rates and other consequences is consistent. But the policy reaction so far seems to be based less on a close reading of those studies than on simple observation of what has happened in China’s Hubei Province, Iran and Northern Italy as the spread of the disease overwhelmed hospital capacity. Yes, governments are making huge decisions based on inadequate data. What else are they supposed to do?

As time goes by, though, we’re going to have more and better information, and the pressure on governments to justify their actions in cost-benefit terms should absolutely grow. To get a sense of the decisions to come, the latest report of the Covid-19 Response Team at Imperial College London, which is said to have helped persuade the U.K. and U.S. governments to embrace social distancing this week with its projection of 2.2 million deaths from the disease in the U.S. without it, is a good starting place.

That 2.2 million estimate is the result of mathematical modeling based on what is known so far about the disease’s deadliness, infectiousness and other properties. It doesn’t take into account “the potential negative effects of health systems being overwhelmed on mortality,” but it also assumes no changes in behavior in the absence of government edict. So maybe those would cancel each other out — or maybe not, given that study predicts that at the peak of the epidemic there would be demand for 30 times more critical-care beds in the U.S. than can currently be provided. In any case, 2.2 million deaths would amount to a very slightly larger share of the U.S. population than the 675,000 estimated to have died in the influenza pandemic of 1918. So much for a century of medical and technological progress! On the other hand, at least the cases and deaths would under that scenario begin to decline after about three months.

The rest of the Imperial College study consists of estimates of what various “non-pharmaceutical interventions,” ranging from case isolation and household quarantine of suspected cases to school and university shutdowns and other social distancing measures, might do to shift this trajectory. If you want details, read the paper, but the gist is that, if temporary, such measures would delay and mitigate the peak of the disease but still result once lifted in an epidemic that overwhelmed critical-care capacity and thus might lead to hundreds of thousands of unnecessary deaths. Only continued “population-wide social distancing combined with home isolation of cases and school and university closure” would keep demand for hospital beds in sync with supply. Continued for how long? “To avoid a rebound in transmission, these policies will need to be maintained until large stocks of vaccine are available to immunise the population – which could be 18 months or more.”

That 18-month forecast has been getting a lot of attention this week. But it’s just a guesstimate of how long an effective vaccine might take (could come sooner, could come never), not advice that we all stay locked up in our homes for the next year and a half. As China and several neighboring countries that have stemmed the spread of the coronavirus pull back on social distancing, we’ll get a better sense of whether and how the disease can be kept from resuming its spread while allowing people to return to offices, schools, factories and such. We’ll also get a better sense of which social-distancing measures are most cost-effective. Just asking everyone to wear masks — not the fancy N95 ones that keep the virus out but cheap procedural masks that make it less likely the infected will spread it — is a low-cost way to slow transmission that has been underused in the West (in part because there don’t seem to be enough of them to go around at the moment). Much-expanded testing for the disease also appears to hold the potential to keep it in check while allowing the uninfected and the recovered to go about their lives. And short of a vaccine there are lots of promising drugs and other medical treatments that before long may start reducing the dangers posed by Covid-19.

Locking down the world economy for more than a year to stop the coronavirus would be insane, possibly leading to more deaths — from malnutrition, conflict and other causes — than the virus ever could. But there are paths we can follow other than doing that or letting Covid-19 just wash over us, and as the weeks and months go by I would expect that we will discover more and more of them.

Source: No, We’re Not All Going to Have to Stay Home for 18 Months

Kerby Anderson A study by the Manhattan Institute explains why it is so hard for middle-class families to make ends meet. The author, Oren Cass, distilled his research down in a Twitter post. “In 1984, the …