The White House says President Donald Trump hasn’t seen the violent video edited to depict him carrying out a massacre of news organizations and political opponents, but he does condemn the contents being reported.

The statement comes as questions about the video and its use continue to swirl and as the people “killed” in the video continue to react.

The fake video was played at a conference hosted by a pro-Trump group at his Miami resort last week, according to a report in The New York Times. It includes the logo for Trump’s 2020 reelection campaign.

In the edited scene from the film “Kingsman: The Secret Service,” Trump as the face of Colin Firth’s character enters a “Church of Fake News” and opens fire on members of the congregation.

The churchgoers have various news organizations’ logos or the faces of Democratic lawmakers and other critics superimposed onto their bodies.

White House press secretary Stephanie Grisham said Monday morning that the president has not yet viewed the video, but condemns its contents based on reports. She said he will see it shortly. Trump has not directly responded.

Reports describing a violent video played at a Trump Campaign event in which images of reporters & @JohnMcCain are being slain by Pres Trump violate every norm our society expects from its leaders& the institutions that bare their names. I stand w/ @whca in registering my outrage
70.2K
2:25 AM – Oct 14, 2019
Twitter Ads info and privacy

Several news outlets are depicted being killed in the rampage, including Politico, NPR, HuffPost, The Washington Post, Slate and CNN.

The White House Correspondents’ Association and CNN called on Trump to denounce the video.

“We have previously told the President his rhetoric would incite violence. Now we call on him and everybody associated with this conference to denounce this video and affirm that violence has no place in our society,” Jonathan Karl, the president of WHCA, said in a statement.

“The President and his family, the White House, and the Trump campaign need to denounce it immediately in the strongest possible terms. Anything less equates to a tacit endorsement of violence and should not be tolerated by anyone,” a CNN statement reads.

Jonathan Karl ✔
@jonkarl
The video reportedly played this weekend at a conference organized by the President’s supporters at Trump National Doral is vile and dangerous. Here is my statement on behalf of @whca 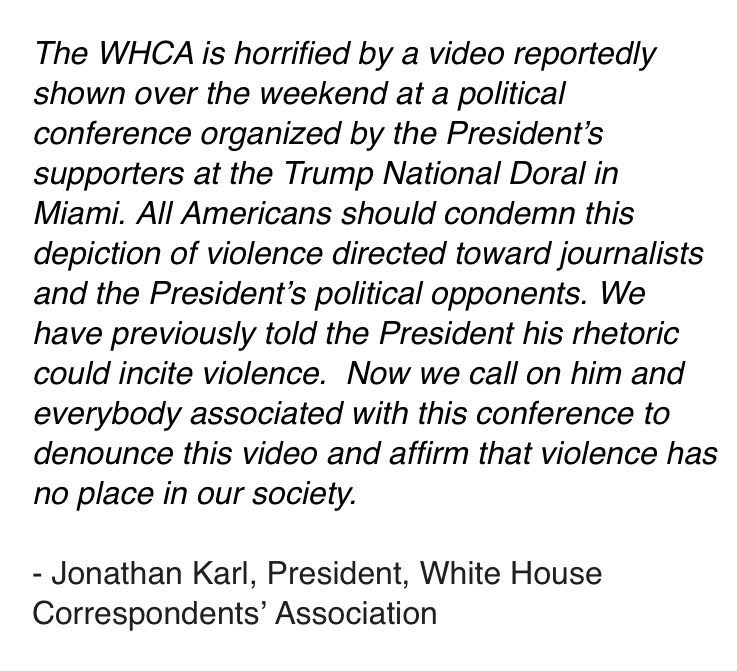 Brian Stelter ✔
@brianstelter
This is about so much more than a single video. It’s about what happens when you plant seeds of hatred and division. It’s about what happens when you give your supporters permission to hate and dehumanize critics. https://www.cnn.com/2019/10/14/media/donald-trump-video-new-york-times/index.html …
Call someone an “enemy” over and over again, and you have some responsibility for what happens to them.
cnn.com
6,598
5:36 AM – Oct 14, 2019
Twitter Ads info and privacy

To see the remainder of this article and others by Ms. Santucci and from USA Today, click read more.

Kerby Anderson A study by the Manhattan Institute explains why it is so hard for middle-class families to make ends meet. The author, Oren Cass, distilled his research down in a Twitter post. “In 1984, the …