Sen. Amy Klobuchar (D-Minn.) said Sunday that women in politics are held to a higher standard than men, arguing that a female candidate with South Bend, Ind., Mayor Pete Buttigieg’s experience probably would not make it to the presidential debate stage.

Klobuchar’s comments mark the latest instance of a 2020 presidential contender taking aim at Buttigieg, a newcomer on the national political stage whose ascent in the fundraising race and in polls for the Democratic nomination has taken many by surprise.

State of the Union ✔@CNNSotu

“Of the women on the stage… do I think we would be standing on that stage if we had the experience that [Mayor Pete Buttigieg] had? No, I don’t. Maybe we’re held to a different standard.” – Sen. Amy Klobuchar on Mayor Buttigieg’s qualifications. #CNNSOTU 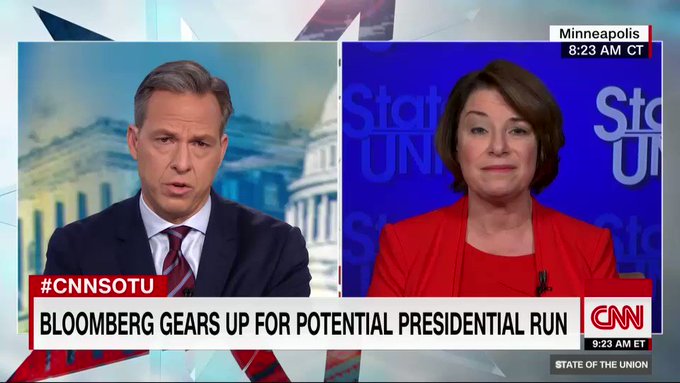 In an interview on CNN’s “State of the Union,” Klobuchar, who is on her third term in the Senate, described herself as “the one from the Midwest that’s actually won in a statewide race over and over again,” adding, “That’s not true of Mayor Pete.”

A New York Times article on Saturday quoted Klobuchar as saying this summer that she doubts people would take any of the female presidential candidates seriously if they were running with the same qualifications as Buttigieg.

Klobuchar also recently declined to say whether she believes Buttigieg is qualified to be president, the Times reported.

Asked Sunday about those comments, Klobuchar clarified that she does believe Buttigieg is qualified but that she is the better candidate.

“The last point I made in that article was that, of the women on the stage — I’m focusing here on my fellow women senators, Senator Harris, Senator Warren and myself — do I think that we would be standing on that stage if we had the experience that he had? No, I don’t. Maybe we’re held to a different standard,” Klobuchar said on CNN.

Buttigieg’s campaign did not immediately respond to a request for comment.

In the third quarter of the year, Buttigieg raised $19.1 million for his presidential bid, a haul that put him third behind Sen. Bernie Sanders (I-Vt.), who raised $25.3 million, and Warren, who raised $24.6 million. Klobuchar raised $4.8 million in the same period.

Recent polls show Buttigieg gaining ground on Biden, Warren and Sanders, particularly in Iowa, whose caucuses in February mark the first nominating contest of the 2020 primary race. Klobuchar has remained in the single digits.

The Minnesota Democrat’s remarks come as Warren has also spoken out against what she views as a double standard against women on the campaign trail.

Warren, who has typically pursued a strategy of ignoring her fellow Democrats’ attacks, responded Friday, saying in an email to supporters, “I’m angry and I own it.”

“Over and over, we are told that women are not allowed to be angry,” Warren said in the email. “It makes us unattractive to powerful men who want us to be quiet.”

Source: Klobuchar says a woman with Buttigieg’s experience would not make it to debate stage because of ‘different standard’ – The Washington Post