Last week was a week of prayer at the White House. Both the President and VP Mike Pence participated in communion with a Higher Power, and some folks in the media don’t seem to be fans.

Blacks in America have listened to Presidents campaign on empty Promises for over 50 years, now @realDonaldTrump has delivered real Policies that are bringing people out of poverty and freeing our black sons and fathers from mass incarceration. The Black Awakening is happening https://twitter.com/TeamTrump/status/1232770532388605956 …
Team Trump (Text TRUMP to 88022)
✔@TeamTrump
JUST IN: Trump Victory announced plans for a slate of new “Black Voices For Trump Community Centers” across the country to build on the growing support President @realDonaldTrump has among Black Americans!
States include: FL, GA, MI, OH, PA, NC & WI 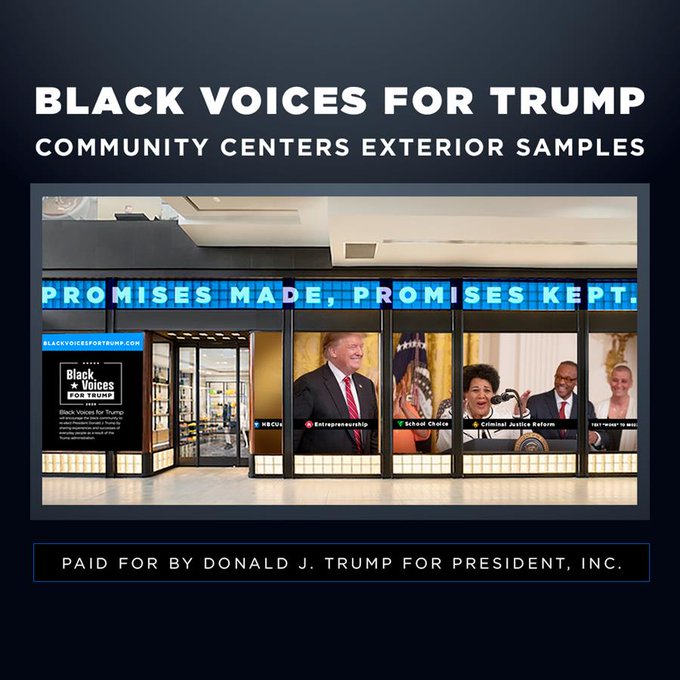 But what’s more is that the group held prayer.

The Vice President was soon bowing his head, too, with his coronavirus team.

Of course, for people of faith, the employment of prayer is part of seeking guidance. But it’s by no means a substitute for using the brain God gave you, and the team assembled to address the virus are obviously there to arrive at solutions based on all available information.

But not everyone believes that.

Said group would apparently include a New York Times Magazine contributor, who concluded that America’s “screwed”:

Thomas Chatterton Williams
@thomaschattwill
Mike Pence and his coronavirus emergency team praying for a solution. We are so screwed. 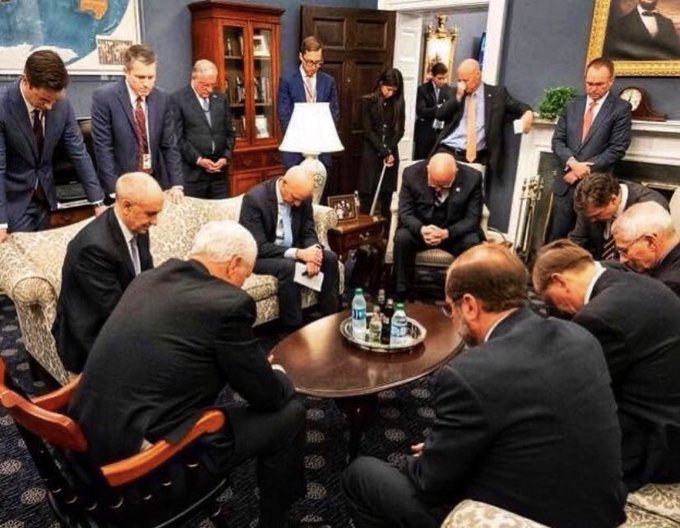 Brian J. Karem
✔@BrianKarem
Clear that @VP and @realDonaldTrump are in over their heads. POTUS is literally praying for a miracle to make coronavirus go away. https://twitter.com/cnni/status/1232856108525551616 …
CNN International
✔@cnni
• The novel coronavirus has killed at least 2,800 people worldwide, the vast majority in mainland China.
• There have been more than 80,000 global cases.
• There have been infections in every continent except Antarctica.
Follow the latest updates: https://cnn.it/2VqaooZ
598
9:25 PM – Feb 27, 2020
Twitter Ads info and privacy

Jordan Uhl, former campaign director for Media Matters for America, dumped on the invocation via sarcasm:

jordan
✔@JordanUhl
very excited to hear all about pence’s coronavirus response plan: praying god protects us https://twitter.com/tvietor08/status/1232814537713188870 …
Tommy Vietor
✔@TVietor08
Oh good. Trump is putting @VP in charge of the #CoronavirusOutbreak. Mike Pence, the guy who once said, “despite the hysteria from the political class and the media, smoking doesn’t kill.” Just the perfect man for the job.
530
5:53 PM – Feb 26, 2020
Twitter Ads info and privacy

As pointed out by The Daily Caller, outlets such as NBC took additional swipes.

On Thursday, the Peacock ran “Pence’s Handling of 2015 HIV Outbreak Gets New Scrutiny,” which included this:

[Northwestern University Journalism Professor Steven Thrasher] said that while HIV cases were mounting in Scott County — which lies about 30 miles (48 kilometers) north of Louisville, Kentucky — Pence told local officials wondering whether he would approve a needle exchange “that he was going to pray on it.”

“His background shows that he brings religion, a lack of science and a budgetary mindset to public health matters. In a time of emergency, those are not the safest ways to be approaching what could become an epidemic,” Thrasher said.

The New York Times published an article with all of the late-night hosts who slammed the administration’s response to the virus, including quotes mocking Pence for praying. The same publication published an op-ed, written as a letter to the editor from a reader, titled “Mike Pence vs. the Coronavirus.”

“A reader cites the vice president’s response to previous health emergencies like AIDS, when he urged prayer,” the article reads.

It’s certainly not the first time anyone in the media has come across as prayer-averse.

In 2018, in the aftermath of a mass shooting, CNN’s Chris Cuomo mistook the meditation as a slap in the face:

“’First, I would like to offer my thoughts and prayers.’ Because that’s what you do when you offer, thoughts and prayers. You mock those who lost loved ones, because if you gave it any thought at all, you would never walk away from any of these without figuring out a better way to deal with them. And prayer — you think leaving it to God is the answer? ‘We pray for strength; we pray for wisdom; for resolve.’ But we clearly don’t want to act on any of those here. So what are you praying for?”

Things have certainly changed, not just in the media, but in our culture.

“And now, on this twentieth day of January, 1993, we commit to you [the President and Vice President], who you have permitted to take leadership at this critical time in our nation’s history. Help them always to see the office to which they’ve been elected as a sacred trust from you. We pray that you will bless their wives who will share so much of the responsibility and burdens. Make [the President] know that he is never really alone but that the eternal God can be his refuge and he can turn to you in every circumstance. Give him the wisdom you’ve promised to whose who ask and the strength that you alone can give. … We commit this inaugural ceremony to you and ask that the memory of this event may always remind us to pray for our leaders. I pray this in the name of the one that’s called Wonderful Counselor, Mighty God, the Everlasting Father and the Prince of Peace. Amen.”

That was from 1993, at the inauguration of Bill Clinton.

Less than 27 years have passed, but that sounds like a great big world ago.

Now Media News@NowMediaScott
The days of Billy Graham and the boys praying on the White House lawn, are seemingly long gone. (AP) 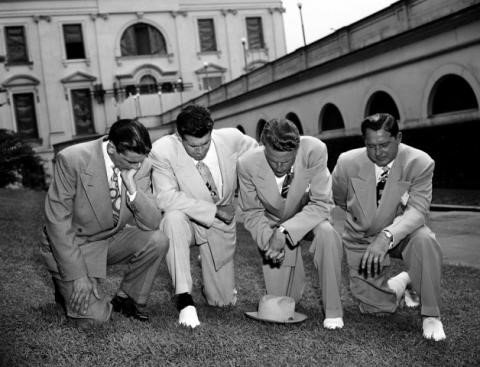 To see this article, others by Mr. Parker, and from Red State, click read more.

Source: As Disdain for Prayer Grows, Media Take Shots at Trump and Pence for Bowing Their Heads Last Week