It was 1978. I was eight years old. A second grader in Manchester, CT. My grandmother took me into downtown Hartford, because she wanted me to see the Hartford Civic Center. Not an interesting building to look at. No historical significance. Just a big building that hosted big events.

The roof had collapsed. The New York Times reported, “the roof groaned and then slumped, first in one section and then the rest. Fourteen hundred tons of twisted steel tresses and lightweight gypsum concrete fell almost, evenly onto the 10,000 empty seats below.” The ten people in the building were not hurt.

Just six hours prior to the roof’s collapse, almost 5,000 people had been present to watch a UConn men’s basketball game. My best friend was there. So was my uncle. Had the roof collapsed during the game, all those people might have died. Both the will of God, and his great mercy, were evident that day.

To my grandmother, it was a sign of human frailty. “Man thinks he is in charge but he is not,” she told me. “Remember the Tower of Babel. Whenever we start to think like that, God will humble us.”

We Worship the Great “I AM”

Christians are, I believe, better prepared — psychologically, emotionally, spiritually — to weather the present crisis than are many of our fellows. People who believe in traditional faith and morals know what’s coming and what to do. For two reasons. 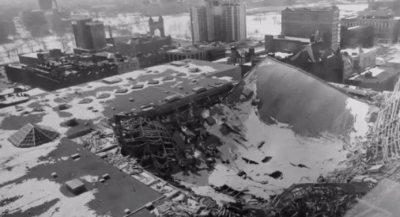 First, because we worship “the Great I AM,” not “the Great Whatever.” That was, almost literally, how The Hartford Courant closed a front page Coronavirus story last Sunday, on what it thought was a reassuring note.

And as forced isolation and social distance increasingly took their toll on his congregants, Olsen, the Norfolk pastor, spoke about collective wisdom, unity and faith,” the editors declared. Then they quoted Olsen: “That’s really the bottom line, for us to be able to remember that through all of this, whatever comes, we recognize that we’re in the hands of whatever we choose to call God. That makes a huge difference.”

Last Sunday, some Americans looked to “whatever we choose to call God.” Good luck with that. We are, almost overnight, a more serious country than that.

Those churches that you see on the main street of almost any town? The ones with a giant rainbow flag? Their congregants may be emptying out of those buildings very soon, on a search for The Real Thing. We need to be there for them when they do.

We’ve Been Here Before

Second, because Christians have been here before. An upheaval in our financial and political systems disorients all of us. We all dislike being isolated from each other and being kept from worshiping together. But this is not our first rodeo. We’ve seen our world turn itself upside down.

In just the past few years, we have seen marriage redefined. Nuns told to provide abortion drugs. The White House bathed in rainbow colors. Biological boys competing against girls in girls high school sports. Drag Queen Story Hour for toddlers at public libraries. Celebrities publicly crediting their abortions for their material wealth. The governor of Virginia openly defending the practice of babies, who survive an abortion, being left to die.

People who believe in traditional faith and morals already know what it is like to have society suddenly upended all around us. Our fellow citizens who erroneously thought themselves to be “on the right side of history” are likely to experience the current upheaval more acutely than us. We need to be there for them.

We Need to Be There

The smallness of man was not the only lesson my grandmother sought to impart that day. I remember her dwelling in particular on the mercy of God. As with the Hartford Civic Center roof, so with the Coronavirus Pandemic. God does not will that bad things not happen. But he does will that through them good should be done. He always has his purpose.

Through all this, we have fought the good fight. We have kept the faith. We will do so again. This time, in a crisis that binds us all together, even as the social distancing requires us to be separate.

We do this just for ourselves, our families, and our friends. For everyone. Including all those who see us as their enemy. Maybe especially them. If we don’t point them to the true hope that is Jesus Christ, who will?

To see this article, others by Mr. Wolfgang, and from The Stream, click read more.

Source: Christians Will Get Through This — Better Than Others, and For Them | The Stream