President Trump has officially appointed one in four circuit court judges as of Thursday, a milestone cheered by Senate Majority Leader Mitch McConnell (R-Ky.), who has often touted the rate of Trump’s judicial appointments.

As of this afternoon, one in every four judges on the federal courts of appeals will have been nominated by @POTUS Trump and confirmed by us here in the Senate. 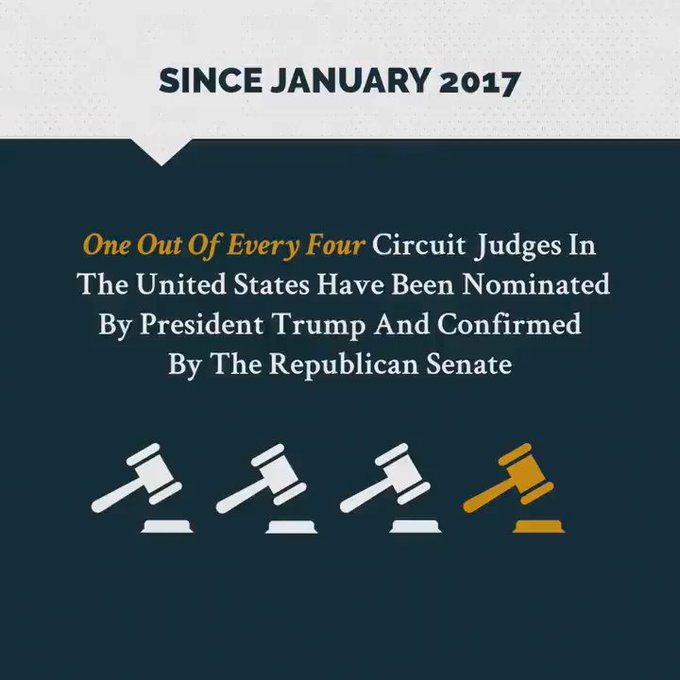 That’s 45 new lifetime appellate judges committed to the key principle that judges should apply our laws and the Constitution as they are actually written, not as the judge might personally wish they’d been written.
4,340
1:36 PM – Nov 7, 2019

Senate Republicans had previously broken the record for the number of appeals court judges confirmed during a president’s first two years in September 2018, after Trump’s 23rd circuit court judge was confirmed.

Trump announced during a celebration at the White House on Wednesday that he has appointed more than 150 federal judges, adding that he expects that to be closer to about 182 in a couple of months.

“In terms of I’d like to say quality and quantity we are going to be just about number one by the time we’re finished,” Trump said at the event.

Senate Republicans joined in celebrating the appointment of the conservative judges.

“Few legacies will be longer lasting than this judicial one. These new judges are principled constitutionalists who have demonstrated excellence and professionalism throughout their legal careers,” Sen. Ted Cruz (R-Texas) wrote in an op-ed published by Fox News on Wednesday.

Sen. Ben Sasse (R-Neb.) said “the President invited me to this celebration for a simple reason: On the Judiciary Committee we chew bubblegum and confirm great judges — and we’re all out of bubblegum.”

But critics and liberal groups rebuked Trump’s appointments and have blamed the large number of Trump appointed judges on McConnell’s running of the Senate.

“These judges are a way of advancing conservative political goals that cannot be achieved through the proper means,” Sam Berger vice president of Democracy and Government Reform for the left-leaning Center for American Progress told ABC News Channel 12.

“Under Obama, they prevented him from appointing judges and when Trump became president they changed the rules so they could rush through a number of ideological and in many cases unqualified judges to the bench,” Berger added.

“As a senator, I have now worked with four separate administrations, Democrat and Republican, on the appointment of federal judges,” Schumer told The New York Times. “I can say with perfect confidence that over the last three years, President Trump has nominated — and Senate Republicans have approved — the most unqualified and radical nominees in my time in this body.”

To see this article, others by Ms. Klar, and from The Hill, click read more.